mdi ensemble was formed in Milan in 2002 and has been artist-in residence at festival di Milano Musica from 2012 to 2017. In 2017 the group has been awarded with “Una vita per la Musica prize” and recently with “Franco Abbiati Prize”. 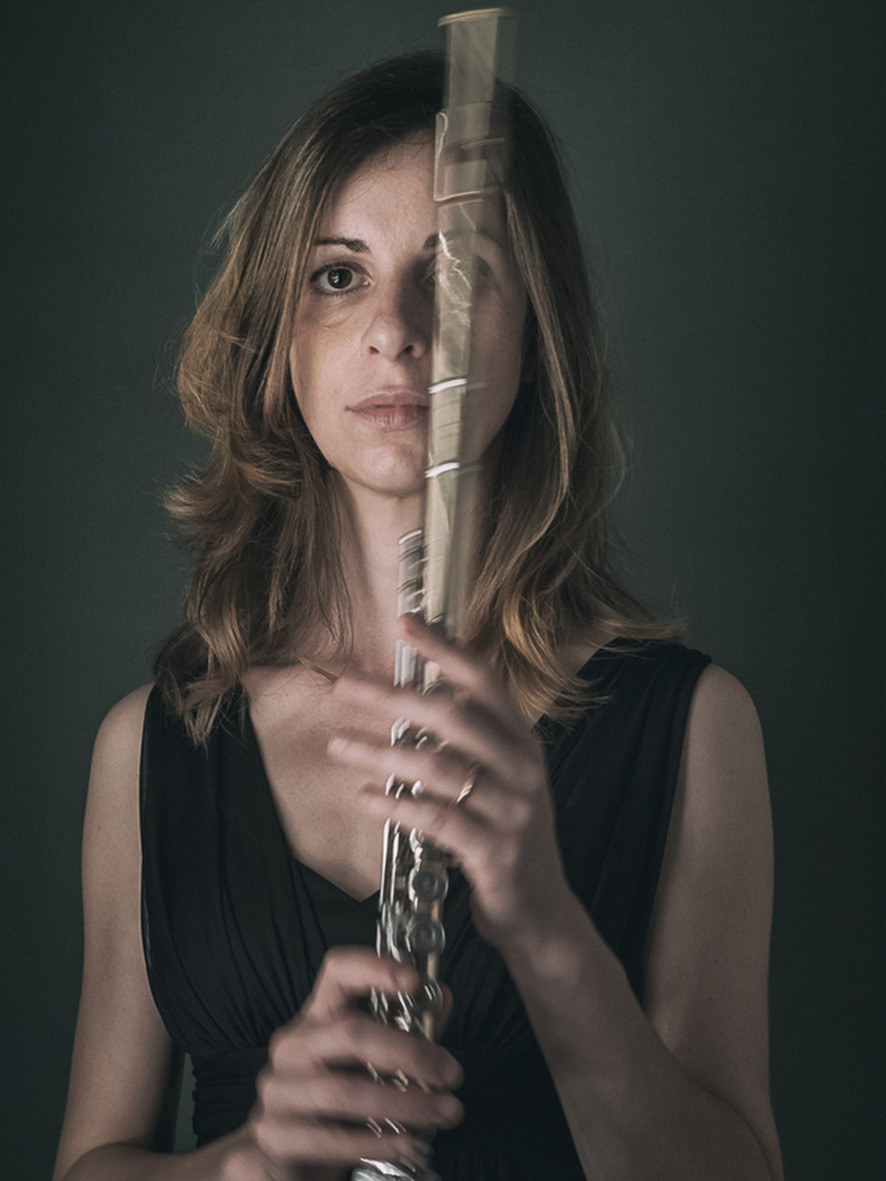 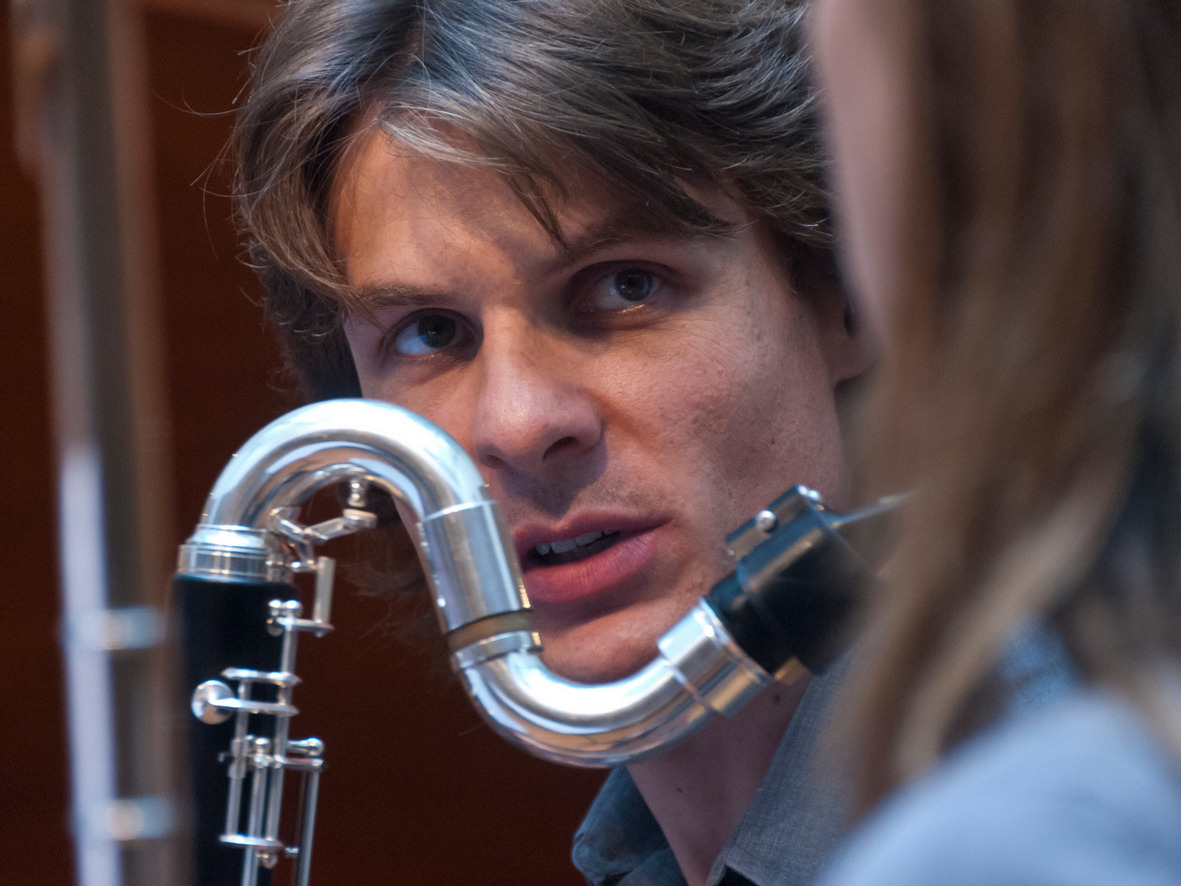 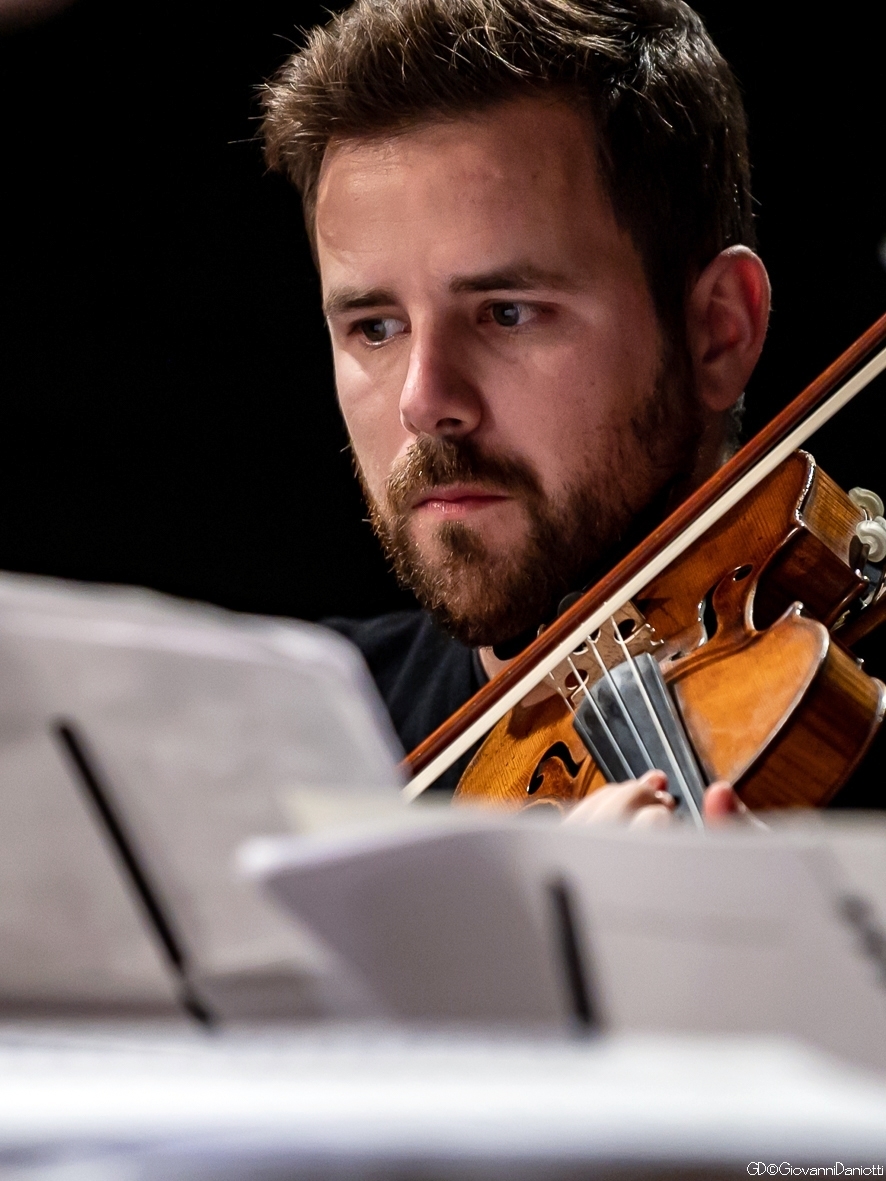 Lorenzo Gentili-Tedeschi was born in Milan (Italy) in 1988 and graduated in violin with a Bachelor’s degree at the age of 16 from the Conservatorio Gaetano Donizetti in Bergamo. He afterwards attended lessons with Francesco de Angelis at the Haute école de musique de Sion (Switzerland), where he obtained his Soloist Master degree performing Beethoven violin concerto with Orchestre de Chambre de Lausanne. He continued to study with Pavel Berman at Accademia Perosi in Biella.

Once back to Italy, he began to guest lead the Orchestra Regionale Toscana, in Florence. In April 2019 he won the concertmaster’s audition at Orchestra di Padova e del Veneto, performing as a soloist at Palazzo del Quirinale in Rome live broadcasted by Italian national television RAI3.
He previously guest led Orchestra Hadyn di Bolzano e Trento and Orchestra del Teatro Petruzzelli in Bari. In 2016 he was also invited from Orchestre de I’lle de France in Paris as second violin leader.

Lorenzo regularly collaborates with Orchestra della Svizzera Italiana and previously performed with some of the major Italian orchestras such as Orchestra del Teatro alla Scala, Filarmonica della Scala, Orchestra del Teatro Regio di Torino, Orchestra da Camera di Mantova and I Solisti di Pavia, under the baton of Gustavo Dudamel, Daniel Barenboim, Valery Gergiev, Riccardo Chailly, Yuri Temirkanov among others.
He led for five years the Academy Orchestra of Teatro alla Scala, appearing as a soloist in the Kammerkonzert by Alban Berg in Rome and Milan.
He taught in Sion as Francesco De Angelis’ assistant from 2010 to 2012. In July 2019 he held his first violin masterclass at Piceno Classica in Italy. He currently teaches violin at Istituto Superiore di Studi Musicali in Nocera Terinese (Calabria, Italy).
He plays a 1923 Simone Fernando Sacconi violin. 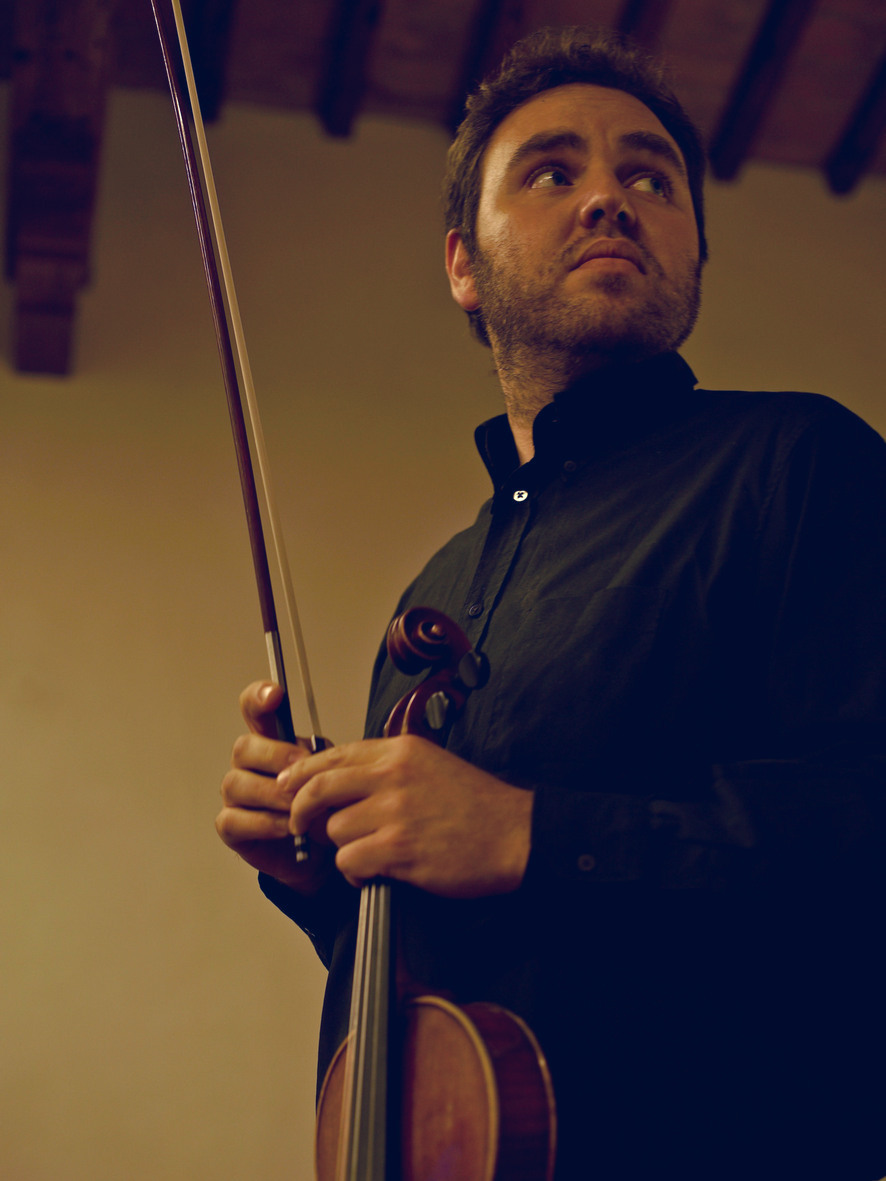 Paolo Fumagalli graduated in violin with x Elena Ponzoni at the “Cantelli” Conservatory of Novara and in viola with Roberto Tarenzi at the “Nicolini” Conservatory of Piacenza, specialazing with Maja Jokanovic, Claudio Pavolini and Simonide Braconi in Italy and in Switzerland.
From 2005 to 2008 he played first viola for the “Luigi Cherubini” Youth Orchestra conducted by Riccardo Muti. He was called to the same role by the La Fenice Orchestra of Venice, the G. Verdi Theater of Trieste and the Orchestra di Padova e del Veneto. He collaborated with other orchestras directed by L. Maazel, Y. Temirkanov, R. Barshai, K. Masur and E. Inball, participating in many world tours.
In 2013 he was the soloist in a performance of Paul Hindemith’s viola concerto « der Schwanendreher” for the Mito-Settembre Musica Festival, accompanied by the Cantelli Orchestra.
Since 2002 he has been a member of the mdi ensemble, a chamber ensemble dedicated to the contemporary classical repertoire. With mdi he is a regular guest of contemporary music festivals in Italy and Europe, Japan and the United States, regularly performing works written for the ensemble. In 2017 Rai5 and Sky Classica channels programmed a movie conceived and produced by mdi together with the composer Helmut Lachenmann. With mdi ensemble he regularly holds seminars on contemporary music at Italian conservatories and universities
For over 15 years he collaborated with the most important Italian chamber ensembles focused on contemporary repertoire. From 2013 he became a permanent guest of Klangforum Wien, a reference ensemble for contemporary music at an international level, with whom he participated for the most celebrated festivals working with directors such as E. Pomarico, P. A. Valade, B. Furrer, P. Rundell, S. Young and E. Poppe.
From 2014 to 2017 he was President of the Contemporary Music Hub Milano (CMH), an association which brings together some of the most significant realities of the contemporary scene in Milan.
He has been a viola and violin teacher at the “Dedalo” school in Novara since 2011, taking care of a class made up of children from 6 years up to adulthood.
He has recorded for Stradivarius, Ricordi Oggi, Aeon, Neos, WDR, Empreinte Digitale, EMA and Kairos.
He plays a Marino Capicchioni viola (1944). 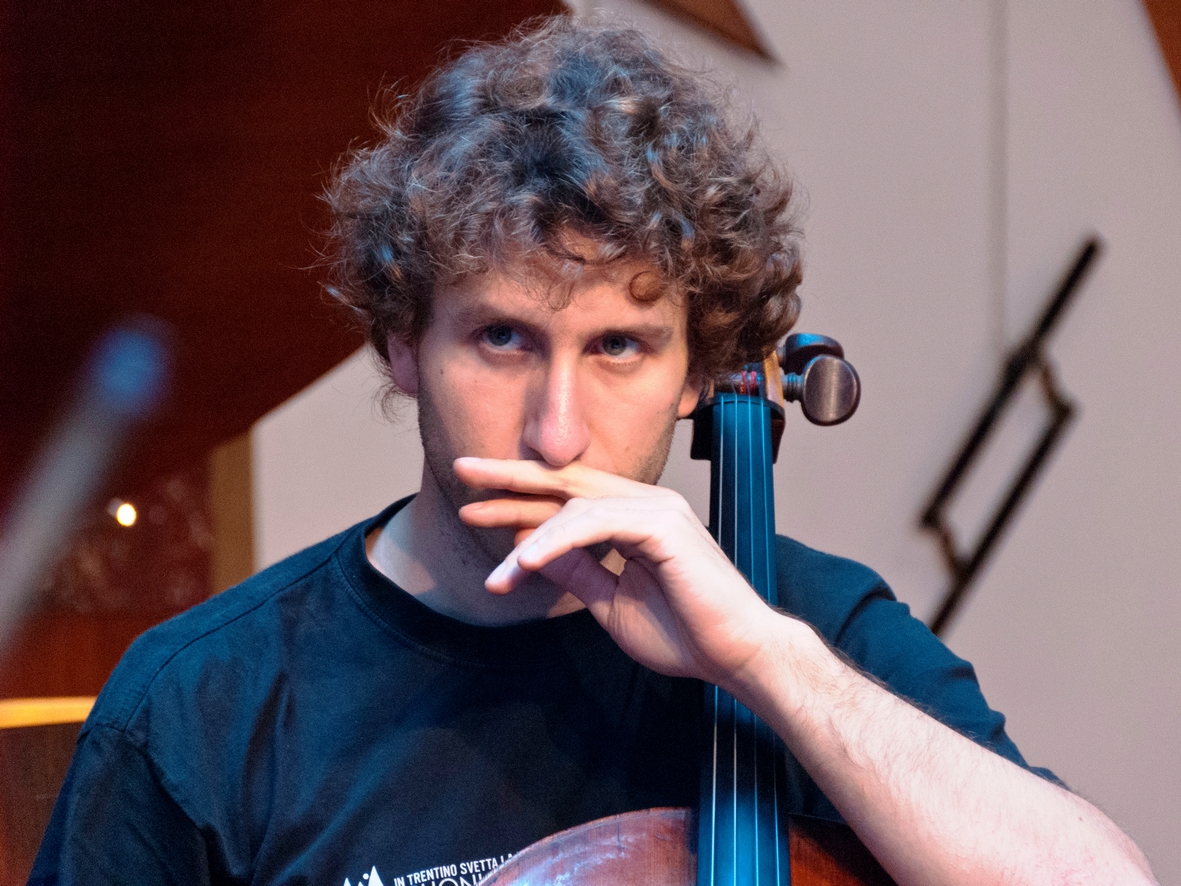 Born in Milan in 1984, he studied violoncello with Marco Bernardin at the Conservatory of Milan, graduating summa cum laude and special mention in 2002. From 2001 to 2006 he perfected his studies with Mario Brunello at the Romanini Foundation in Brescia while also attending philosophy classes at Univeristà degli Studi di Milano. Furthermore, he followed courses held by Enrico Dindo, Enrico Bronzi and Frans Helmerson, Günter Pichler from Alban Berg Quartet and Claus Christian Schuster from Altenberg Trio.He is mainly active as a chamber musician, and he is a founding member of Quartetto Lyskamm and mdi ensemble, a formation dedicated to contemporary chamber music. With Quartetto Lyskamm he was a student of Artemis Quartett, Cuarteto Casals, and of Cristophe Coin, cellist of Quatuor Mosaiques; furthermore, he obtained a master’s degree in chamber music at the Musikhochschule Luebeck. The quartet won second prize at the Concours “Franz Schubert und die Musik der Moderne” of Graz and was awarded the Claudio Abbado prize from the Borletti Buitoni Trust.With mdi ensemble he regularly attends the major Italian and European festivals. He collaborated as a chamber musician as well as a soloist with composers such as Helmut Lachenmann, Fausto Romitelli, Beat Furrer, Pierluigi Billone, Simon Steen-Andersen, Mauro Lanza, Giorgio Netti, Mauricio Kagel, Gerard Pesson, Stefano Gervasoni, Dmitri Kourliandsky and Luca Francesconi. With pianist Alice Baccalini he created “Brahms a Milano”, a project involving over 90 musicians in the performance of Johannes Brahms’ complete chamber music; the concerts mainly took placein peripheral areas of the city, and each sponsored a different organizations dedicated to the promotion of social inclusions. He is often a guest of Radio3 RAI’s live music initiatives and programs: Radio3 Suite, Lezioni di Musica, Piazza Verdi, as well as the radiophonic festivals in Matera and Cesena. In 2002 he was awarded the bronze medal for Merit to Culture and Art ; in 2009 he received the international prize from the Association Amici di Milano (Friends of Milan), under the patronage of the President of the Republic; in 2010 he obtained the Ivano Becchi Scolarship from the Foundation Banca del Monte di Lombardia. He is a ski mountaineering instructor for CAI (Italian Alpine Club), at Silvio Saglio School at SEM (Società Escursionisti MIlanesi).

Born in Torino, Luca Ieracitano started playing the piano at the age of 7. Among his teachers: Maria Tipo, Andrea Lucchesini, Pietro De Maria, Mario Brunello, Altenberg Trio Wien, Claus-Christian Schuster, Günter Pichler, Enrico Dindo, Frans Helmerson, Dora Schwarzberg and Enrico Bronzi. He was supported by De Sono Association of Torino from 2001 to 2007.
He performed in Europe, U.S.A. and Japan, regularly appearing at some of the most relevant festivals and venues, as soloist, chamber music and orchestra. In the last 15 years Luca Ieracitano focused his research on contemporary and XX Century music and art. He premiered hundreads of new works and collaborated with some of the biggest composers of today. Since 2008 he is member of mdi ensemble of Milano.
Since 2011 Luca Ieracitano collaborates with the artists Allora & Calzadilla, performing and teaching their work “Stop, Repair, Prepare: Variations on Ode to Joy for a prepared piano”; he performed the work more than 400 times in Italy, Belgium, Germany, Spain, Ukraine and Australia.